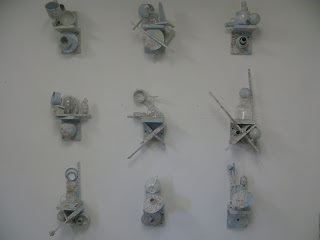 The surfaces of the the objects are covered with cut up maps. The idea that somebody could continuously rearrange the parts of the sculpture and play it as an actual game is an added bonus. A kind of endlessly changing sculpture. There are a finite number of possibilities but only if you keep to a rule system.
Posted by dave stephens at 13:11 No comments: 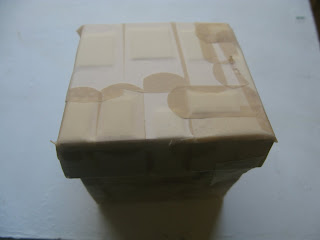 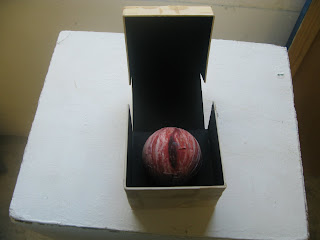 Posted by dave stephens at 10:34 No comments: 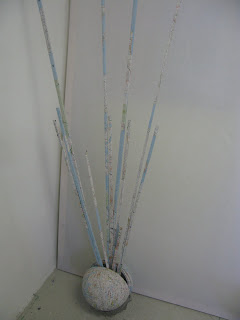 move about. It seemed to encourage visitors to be very slow and careful, some just sitting down on the floor to be as still as possible so that the columns weren't disturbed.
Posted by dave stephens at 11:39 No comments:

The word was coconut 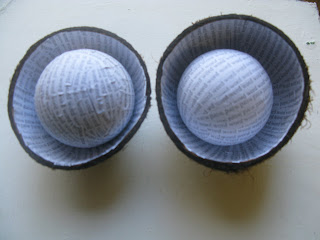 The endless words formed a rhythm across the page.
Posted by dave stephens at 12:56 No comments: 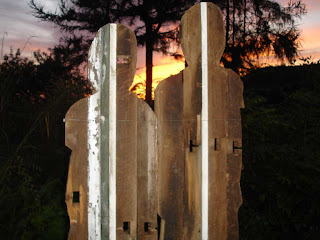 3 or 4 years old now these little figures watch over the White family gardens in Dorset. 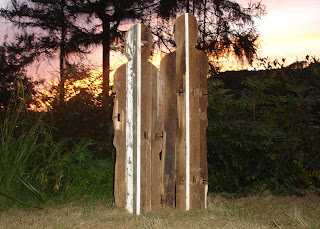 Posted by dave stephens at 14:03 No comments: 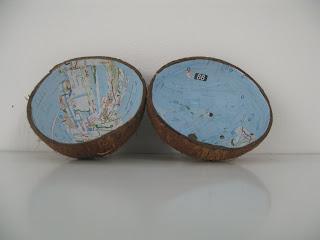 Worlds within worlds. Somebody once told me about a sculpture that they created which was about going into a supermarket and buying an orange, cutting a small hole in the orange and then inserting a £5 note into the orange and making it look like it hadn't been tampered with. Then going back into the supermarket and replacing the orange. Somebody would get quite a surprise. An artist called Polly who always wore pink and was based at Phoenix in Brighton for a while 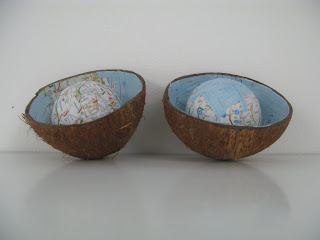 told me about an art thing that she used to do which was about buying a plain white tee shirt from somewhere like Gap and then printing a political slogan on the shirt and taking it back to the shop. With a receipt she could get a refund and then the shirt would be put on the resale rack. It was a similar thing to a Cildo Merieles thing where he printed political slogans onto Coca Cola bottles and then handed them back in so that they would be returned to the factory, refilled and then resold.
It is strange how people can convey political messages or messages of contempt using other peoples merchandise. I worked in a bakery once where one of the workers used to regularly remove the middle slice of a loaf of bread, take a bite out of the middle of it and then replace it in the loaf to be sent out and sold. Little did he realise that he was joining a long tradition of protest.
Posted by dave stephens at 12:11 No comments: