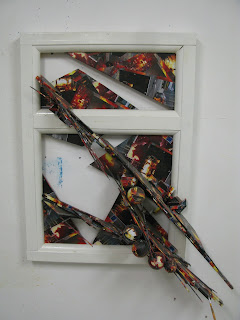 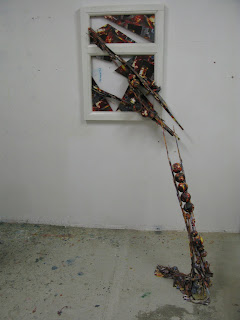 The window sculpture originally was a stand alone sculpture but has recently been exhibited with another sculpture which seems to complement it. In a way most of my sculptures at various times become entwined in each other. They are not necessarily a singular experience. Maybe they just inhabit the same world.

Posted by dave stephens at 07:18 No comments: 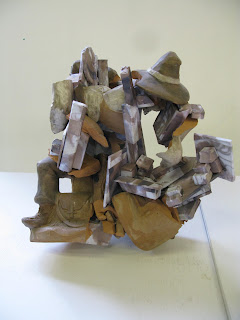 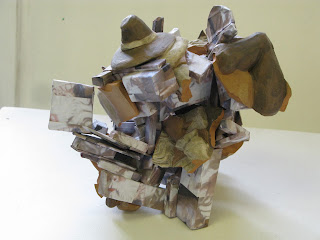 Posted by dave stephens at 10:41 No comments:

The John Stezaker at Bexhill is pretty impressive but kind of straight forward in conception. He is known for having a huge collection of old post cards, presumably all sorted into categories such as churches and film stars. He has then photographed a category and literally turned each photo into a frame of a film. Using a 24 frame per minute timing, the film then hits you in the face like a visual stutter.

You kind of know what is going on but can't make any visual form to it. Its like watching the movement of a tide where shades and tones seem to join together to give abstract form to the whole. This is the kind of visual form for musical serialism like the compositions of Steve Reich. Particles coming together to form a whole.

Probably the most accessible of the films involves a repetitive sequence of horses. These images come from a book of studs. They are very similar to each other in the way that the horses stand rigidly facing in the same direction with very little difference in their size or stance. This means that only the tonal qualities of their markings and the background changes radically. The actual subject matter, the horses, merely flicker and shimmer. Reminiscent of the early film experiments of Muybridge, the film almost creates the opposite affect. Everything moves apart from the horses.

On an adjacent wall the film projected concentrates on church interiors. In some ways this appears the most successful in the way that it seems to portray a comprehensive journey. The similarity of the initial imagery seems to drive the viewer’s eye into a form of tunnel vision as if driving through a motorway underpass or looking through a train window. Its kind of Luis Bunuel meets Willie Doherty. A journey that appears to transport us through both time and consciousness.

It is this question of consciousness which seems to be the underpinning thing which governs the exhibition and comes to the fore in the last film. Based on Stezaker’s collection of postcards featuring film personalities, it is in fact the thing that hits you first when you enter the room. Because the subject matter of each individual frame has a complete structural difference the immediate impression is of being hit between the eyes by a scatter gun of imagery. A visual assault, kind of inducing nausea and panic in equal doses. As with all things that act on your central nervous system you have to come up very quickly with ways of coping with it in order to avoid an inevitable physical response. As all drunks know and anyone who has experienced the final dip of a shelter skelter, the only way to cope is to relax and go with it. Within Stezaker’s film there is a similar initial reaction. An attempt to focus on a central area within the film causes it to hit you in waves and creates more lyrical movement. There is a tendency within the mind then to try and focus on an individual frame, which of course is impossible. Did I see Charlie Chaplin in there? Was there a scene from High Society? Who knows.

In a way it is not important because in this case the medium really is the message. Its not dissimilar to the way that the actual mind works, the way memory is fragmented and then reassembled in order to make sense of the world. This is the raw material of memory presented in its entirety and in a way that questions how we deal and cope with our lives. William Burroughs experimented with these kinds of cut ups both with words and film as a way of questioning our acceptance of our consciousness. This kind of cut up is not a new thing in art and yet Stezaker seems to be putting a new lilt on it. It is a strangely British preoccupation which formulates itself into collecting the detritus of other people’s lives. Jumble sale mentality is embedded into the British psyche and no art college would survive without that fundamental obsessiveness of the collector . Essentially this is where Stezaker seems to come from. Out of the eaves of the art college and into the collective memory.

Posted by dave stephens at 12:30 No comments: