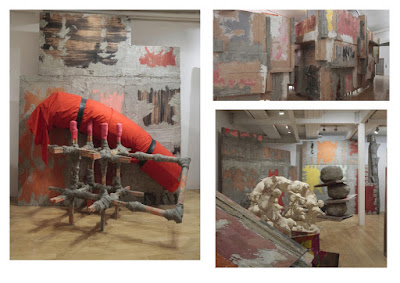 Phyllida Barlow at the Fruitmarket is a revelation.

I first came across her work in the British Art Show 5 exhibition about 15 years ago where her work stood out amongst the other work, which had a tendency toward the bright and difficult to ignore, as being quite understated and very much hand done. Rather like the type of materials that you might find on a Blue Peter show, ‘and here’s one I did earlier”, Barlow’s work was immediate and temporary in the transient way that children make environments for their toys out of shoe boxes and glitter tubes. No worries about anybody seeing the making process everything being up front and yet, like a present, holding a person to ransom about what is hidden or can be revealed.

Since that initial encounter with Barlow’s work I have seen it at Hauser and Wirth on Piccadilly in London, where the deserted bank building had been transformed completely, including a ladder into the loft where you witnessed hanging sculpture which was reminiscent of, again, the kind of make do and mend christmas decorations that anybody brought up in the 50’s is used to dragging out of boxes each year in all their faded glory.

And then of course there was the Duveen Gallery installation at the Tate last year that exploded everybody's preconceptions of what installation sculpture really was. The gauntlet had been dropped. Mischief was afoot.

So, a trip to Edinburgh was inevitable, a sort of pilgrimage for want of a better term, certainly a purpose. The Fruitmarket exhibition is something else again. It stretched over two floors but also included hanging pieces above the customers in the cafe and small hand done gifts in the gift shop. Barlow doesn’t just create an installation, she inhabits a space. Like a team of squatters or people digging a mine shaft underneath your house.

The exhibition stretches over two floors and each level begins to impose itself on the other. The upstairs gallery has one large installation dominating it, the structure being so imposing that you are forced to walk around the outside of it. Gaps appear in places, impregnable and yet enticing and, like a child at the sea shore encountering a cliff that appears impregnable, each crevice becomes an entrance to a fantasy world of caves and adventures. Stretching yourself into the negative space gives your a framing view of the outside world. Occasionally the structure seems to form corridors or tunnels but these seem to extend to nowhere and leave you stranded in the heart of the sculpture as if an uninvited guest. Uninvited is the right metaphor because even when you are inside these cracks, you feel excluded and  somewhat externalised. Kind of like a gate crasher at a party who finds himself alone and ostracised to the kitchen. A slightly Gormanghast type of experience, the structure is an obstruction, a growth that has taken over the space, filling it and then beginning to ooze out into other spaces, a barrier. The stairwell that leads into this space has already been invaded making you duck and weave to avoid the obstruction.

The downstairs exhibition could be related or detached, feeling like parts of the upstairs had broken away, escaping into the space in a bid for freedom. It is difficult to tell exactly how many pieces are on display or “inhabiting” the space. They relate and interact in a way that presents a visitor with a kind of visual obstacle course, an old curiosity shop of ideas and juxtapositions.

The exhibition is called “Set” which is a clue within itself. As I clambered around and amongst the large scale piles and objects there was a theatricality about the approach which seemed to work with the overlap between sculpture and the illusionistic space which occurs within a stage set. In the Fruitmarket you are asked to look at a structure both as an inside and an outside. Unlike a traditional stage you are never asked to ignore the reality of the materials that are involved. In fact you are constantly expected to see both sides of the set at once. These materials are throwaway, lightweight and in many ways, fragile. And yet they are being combined with the more substantive qualities and visual support of such things as plaster and cement. They create the illusion of strength but are actually layered on in skims to emphasise the lack of reality.

The backs of pieces are often exposed like the back of stage theatre flats which even have words left on them to add links to their past life. The word Caro occurs more than once, which indicates that in fact the wood started its life as a packing case and probably one that housed a past exhibition of the sculptor Anthony Caro. This of course opens out the question of where Barlow exists within the context of contemporary sculpture. The reference to Caro is intentional, a conscious choice to  associate herself with someone from the recent past who throughout the 2nd half of the 20th century dominated the British art scene by being hailed as the harbinger of a new kind of sculptural modernism.  It is well publicised that Barlow until recently worked at St Martin’s college as had Caro in the 1960s. This reference feels even more personalised in that St Martins is really seen as the centre for the development of British sculpture from the 50s onwards. Caro and Barlow’s commitment to this educational stance ties the two together within an ethical methodology.

Obstruction is probably the key word for this exhibition. The illusion of reality that you get with the space that is created ties in with essentially a theatrical approach but also how materials can take on a number of meanings. Modern sculpture has had a preoccupation with structure and truth to material. Performance art to some extent broke this down and reintroduced the aspect of imagination and the idea that an art work can be lived in as well as looked at. Barlow is conscious of these developments. Her sense of meaning is tied in with the narrative and as such the viewer is a central aspect of this story. There is a strong sense of time, space, place and identity woven together into the language involved.

Quite something really.
Posted by dave stephens at 04:41 No comments: 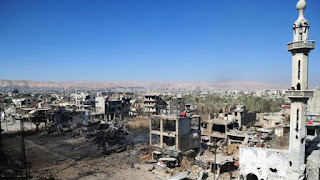 My son was visiting Berlin and met a Syrian guy who he got chatting to. The Syrian was a refugee and talked a lot about the situation in Syria and how difficult it was living in a war torn country. When my son got back to England the guy sent him a picture of his town and said that the building in the centre was actually the house where he used to live. I was quite amazed by the way that some people have to come to terms with appalling conditions in their lives but also that we just take it for granted that it is quite normal to encounter these things on the internet or through television. Its the strangeness of watching the news whilst eating your dinner.
I have recently been working on a series of sculptures that are all based on building that are half demolished through such things as war. It seemed right to use the photo that my son had been sent as part of one of these sculptures. I will probably make it part of a series of 4. 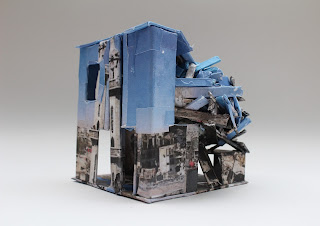 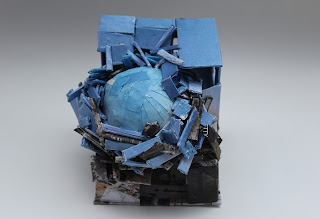 Posted by dave stephens at 09:56 No comments: 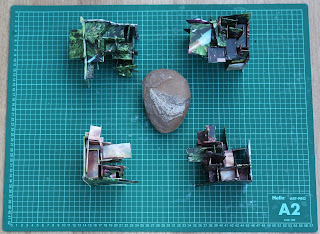 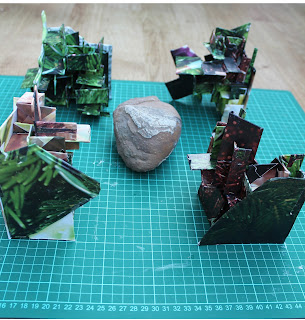 In recent months I have been making small sculptures that are based on the grid system on a cutting mat. I am tending to keep them in sets of 4 with each one using the same picture. The small cubic individual structures tends to look like a building that is opened up to the outside. This is because each one was influenced by a newspaper picture that I saw of a set of buildings in a war zone that had been bombed and shelled so that parts of their structure were missing. The rock in the centre contains the fossil of what looks like a leaf which I found on a beach in Dorset. The photos are of leaves and ornaments from a Christmas tree.

Posted by dave stephens at 06:06 No comments: