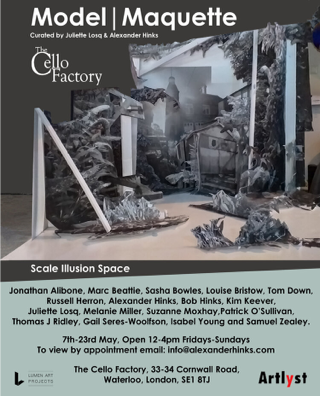 A curated show set in a disused and reclaimed industrial space, the Cello Factory has been a gallery for about 15 years, now run by Alex Hinks but originally started by his father. New to me but I have been introduced to it by the work of Louise Bristow who is part of the current exhibition.

Model / Maquette is a curated show by Alex Hinks and Juliet Losq. As such it is a well thought out and executed exploration of the way that artists can enter into their practise by using a variety of inroads and experiments. The curators have cleverly and carefully looked at keeping the restrictions open ended rather than prescriptive. If for instance you take the exhibits of Hinks and Losq themselves you discovered two widely divergent starting points, that both fulfil the brief by coming at it from very different angles.

Losq has the start point of building a model to large scale proportions.  What we then have is an installation that the viewer can move in and out of. Using highly refined qualities of painterliness and a sharp eye for proportion and scale we have a dissected picture which has been moved forward and backward in order to question our perception of pictorial reality. These starting points extend outwards from a fundamental questioning of illusion and reality. There is theatricality involved within the process which tends to make the piece feel like it is a structure within a narrative. A reflective set of qualities that make the viewer ponder on the possibilities of what has occurred within the context of its environs.

Hinks comes at his contextual problem from a much more diagrammatical view point. The main wall piece that he has created has the feel of a cosmic DNA type structure. Molecular in nature the it is made up of a series of identically sized triangular pieces of wood which can be used on a wall in whatever formulation the artist chooses, hence its feeling of atomic structures. However each triangle had been covered in amorphous patterning that is reminiscent of oil on water. This extends the idea of  a flow within the structure but also makes the fundamental geometric nature of the form into something that moves out of its own parameters. The title of the piece is Astral.

Reflecting back on Losq’s imaginative use of atmospheric space we have the work of Suzanne Moxhay who reflects on the potential of film  and painting to achieve ends that cause the viewer to transport themselves into a world of mystery and narrative questions. Mood is dominant in this work and the movement of story telling is only functional as a way to guide yourself through its fields of sensation.

Louise Bristow is an obvious for a show with this title because her work runs through the gamut of model making from archival photos of strange industrial brutalist type architecture through to incredible creative townscapes. Her studio practise involves much research and occasional visits to sites of archeological interest to a student of left wing politics and its manifestations in the Eastern block. The striking thing about the eventual finite images is the way that they seem to record a period or event in history that is tied in with structure and space. The fundamentals of early abstraction in its geometry and spatial concerns appears re-inhabited and peopled by a race of beings that are uniformed and cleansed to fit with an imaging that has its foundations in propaganda. With Bristow’s work however you have something that has many layers of experience and many ways of entering and exiting from the images. A layering of the way that we observe our surroundings and the beings that inhabit them. For me its a kind of Alice in Wonderland meets Thomas Demand. There is a level of frivolity which polishes and cleans up the views which has leanings towards the way that scale and scenic devices become a mainstay of both Lewis Carrol and Louise Bristow. But ultimately what we have is an almost scientific dissection of the scene which makes Thomas Demand an apt and timely connection. The two pieces on show at the Cello Factory are an excellent introduction to Louise Bristow’s work as well as a great way to contextualise her creative practise.

The work created by Gail Seres-Woolfson takes the form of a room size installation incorporating elements including, film, slide projection, experimental sound, sculpture, architecture and collage. The piece functions as a whole by being initially inspired by her collage work into making film and slide representations of a building from a different part of London. In order to do this she had to create structures which could be then used in the film. This whole process is an intriguing example of how the theme of model/maquette could be identified, explored and redefined in order to make an installation that itself became a full record of the process involved in its creation. Overall it gave the feel of an intense visual experience that was multilayered and multi faceted. Based within the concepts of architecture and geometric abstraction it nonetheless created a piece that seemed to intensify ideas of  growth and expansion. If you were looking for a piece that seemed to bridge the ideas involved in Hinks and Losq’s work this is probably the one that I would choose.

Architecture and its abstract qualities is explored more formally in the work of Patrick  O’Sullivan whose piece deals with the contrast between the geometric,  balance and the affect of expressive material interventions when they interrupt the whole.

Good things often come in small quantities which is certainly true of the pictures of Jonathan Alibone whose small sized pictures have incredible power through their remoteness and sense of isolation. The use of landscape with fragments sticking out from the ground give a feeling that something has happened a long long time ago and we only had the monumental detritus to indicate and extend the clues. Caspar David Friedrich came to mind and also the prints of Emma Stibben. But neither had tried to display the theme on such a small scale. A genuinely courageous gesture.

I gained a fantastic sense of wonderment when I thought I had discovered a child’s plasticine model on a shelf in one corner only to discover that the models of sleeping bags and other detritus from a student flat was actually made of bronze and was the work of the artist Thomas J Ridley. More of these tiny insights into a throwaway experience were scattered around the walls to capture my intrigue. Truly a great way to experience art. By accident and in disbelief.

Samuel Zealey extends this exploration of what looks like reflections on the imaginative existence of youth. His diagrammatic plans for paper planes lend weight to the childhood insistence that things happen because you say they do. I can fly in my own plane and it can be made out of the back page of an exercise book or indeed a large sheet of steel.

Marc Beattie’s work with FRAGILE tape struck me as an intriguing observation on what we try to send through the post. Including people who have sent themselves through the post. A huge pondering upon issues to do with human travel which is so central to world issues and migration.

In a similar vein Russell Heron presents us with the problem of our concepts of worth and how our prejudices are affected by a debasement of material. The throwaway becomes a different concept when time and skill are reintroduced to explore it as an artistic resource. Both Heron and Beattie used highly skilled observational work to transport objects which appear almost castoffs into high art. In the case of Heron it was with pencil and with Beattie it was paint.

This approach of using models as a start point occurred in many of the exhibits with people such as Isabel Young and Bob Hinks  exploiting the use of boxes as a way to contain and frame the experience. In Hinks’ piece it literally was a whole festival contained in a suitcase.

With Young we have a way of using a box to contain a series of questions. A form of magical story telling with devices such as ladders being used as ways of directing our thoughts. Its as if we have encountered a strange mining process which both astounds us but also makes us worry about the whereabouts of the inhabitants.

On encountering the work of Sasha Bowles you find yourself in a world where pomp and ceremony of a classical interior meets the dream world of a futuristic scenario. A kind of questioning of the way that we perceive  time and the restraints that occur within the norm.

Tom Down has a multilayered approach which deals with the concept of landscape being idealised and romanticised. As with Bowles we have an experience which questions the way that we view a situation and how we introduce stylisation as a way of reflection.

Within the work of Kim Keever we have again the use of the incidental or accidental to explore emotive visual imagery by dropping paint into water in order to then photograph and record. A kind of freezing in time of a second of motion that could occur within an expressive painting technique.

In contrast to this approach we find the work of Melanie Miller in the way that you discover new worlds in woodland. A dusky sneaking amongst the trees until a hollow reveals a peak into another beings world. A home, a nest, a comfort zone. Out of the darkness comes a separate world a haven from the dangers a mossy nook in a perilous world.

Throughout the whole exhibition there is an incredible feel of an intense involvement with the puzzles that life can present and the ways that can be discovered to explore and extend  them. This is a process which can help partially explain but in real terms opens up new questions about how art can be used to explore these issues.

There are 17 artists in the exhibition and to be honest there were absolutely no weak links. This is a reflection on the clever and informed way that the show was curated. Hinks and Losq have a wide knowledge and a deep understanding of the processes that fire creativity. It is a credit to this studious approach that makes the show work so well as an exploration of the stages of how artists actually resource their activity.  It is an exhibition which opened out the possibilities of scale, extended our conceptions of illusions and redefined the ways that we consider space. Immensely enjoyable as well as asking all the right questions.

The Cello Factory is a real discovery.

Posted by dave stephens at 10:15 No comments: