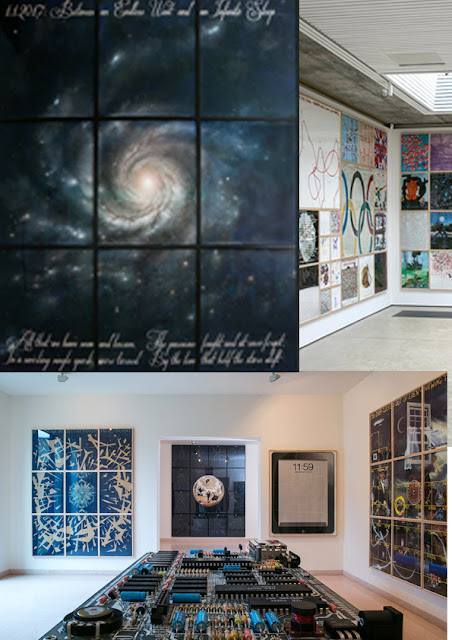 Nearly 15 years ago whilst at the Philip Guston exhibition at the Royal Academy I watched a video which outlined Guston’s studio practise. He stated that he would enter the studio and then start work but if it was working well felt like the art had taken over and he was no longer making the decisions. Visiting the Keith Tyson exhibition at the Jerwood in Hastings I felt that statement coming to life. The idea of studio practise being absolutely central to an artist’s experience has been acknowledged, extended and applauded in a way that takes the viewer firstly into the intimacies of the artist thought levels but then outward into extremes of the universe and an exploration of the very edges of our concepts and understandings.

The initial room is full from floor to ceiling with more or less identically sized framed paintings. It is reminiscent of the library story by Jorge Luis Borges, where the reader is led through the book shelves with endless copies of the same book which gradually progress and change as you leaf through each copy in search of an ending which is forever elusive. In Tyson’s case these are described more as sketchbook pages than as individual experiences. They are large scale, way beyond the normal size of a sketchbook and are wall drawings that are executed continuously in Tyson’s studio. Chronology is thrown out of the window and the exhibits are arranged according to Tyson’s choice and dictate. Whether this dictate would be constant or a path of continuous change becomes part of the essential workings of the process. Like rearranging a chess board, each piece being essential to the scheme of things but being variable in its positioning; they work as teams but also stand alone. Subject matter moves and shifts with whim and affect.  Occasionally tying in with momentous occasions such as a portrait of Baraka Obama or more prophetically Donald Trump. Other times it seems deeply personalised as in the ones that mention marriage counselling. There is confessional at work here;  a blood letting in order to self deprecate and expose.

This exploration of the self which is then woven into aspects of the outside world and then innermost thoughts about the physical nature of the universe seems well summed up in a statement that appears on one of the drawings from May 4 2004 “All acts of artistic imagination are discoveries rather than inventions”.

It is the nature of the practise that the process is exploratory and research based. In some ways the most important aspect of the work is in the setting up of the final exhibition. Like a gambler or a card shark Tyson uses both the aspect of chance that comes from such things as John Cage and Mark Boyle alongside the domestic and the way we all organise our possessions. Oh but of course that boomerang should go next the that clown because of the similarity between the clown’s mouth and the wooden artefact.

There are 3 rooms in the exhibition each loosely titled as Day to Day, Microcosmic and Cosmic. The Day to Day is by far the largest with the Microcosmic significantly reduced in size to house a mock up of a main frame computer. The structure lies on its side and is meticulous in its depiction of the valves and boxes that presumably housed the original computer. Clear highways and byways seem to move information about as if literally being carried along the wires as if by horse drawn carriage. It is a far cry from the way that information now moves through the air in invisible movements that surround us and engulfing us in a way that remains invisible and yet instantly accessible. This reference to the origins of information technology seems apt when you start to consider the way that Tyson operates. Many of the wall drawings are dated with a single date. Some of them are extremely complex in execution and seems to suggest that once started Tyson spends a whole heap of time in the studio until it is finished. Each one then becomes a window on that aspect of Tyson’s time. A static version of windows on a computer. When you put a search into a computer it brings up endless variables, a non stop access to random selection. And yet once reduced to the physical to the mere structure of a machine it then begins to take on other implications. The thing that immediately comes to mind is the animal mazes that behaviourists use to judge animals and the way that they operate their intelligence. A 2016 statement in one of Tyson’s drawings hints at this link as well “Chronic overcrowding in rats caused enlarged adrenal glands”.  Again what we have is a way to explore ideas that start with the main frame but then counterbalance this with the fundamentals of the creative process. There are of course similarities  between the way that museums curate and use their collections to explore the deeper implications of the human condition and its development.

Whether it be the Guston view of the studio which acknowledges the artist as a medium for the imagination or the way that artists like Lucien Freud or Frank Auerbach spend huge amounts of time isolated in their studio exploring in great depth their response to similar daily stimulus and routine, self imposed isolation is a key to many artist’s practise. Tyson is not alone in the way that he monopolises and explores his internal meditations with his external stimuli, the recent Joseph Cornel exhibition at the Royal Academy showed up a process that turned the mundane into the cosmic and added extra terrestrial implication to the everyday. This in some ways is the closest to Tyson’s way of working. The wardrobe entrance to a hidden kingdom or in this case the table top launch pad to the nearest black hole.

The final room, “Cosmic” brings it all into a logic which both summarises as well as expands the process. A large scale view of the universe with a mirrored ball in the centre of the room. The ball has been attacked but never pierced by pieces of meteorite which stretch the surface and create new visions  of the world that surround it. Distortions or extended realities? Or as Tyson puts it in August 23 2009: “How can I be shocked when I know deep down everything is the same age.”

Posted by dave stephens at 14:41 No comments: